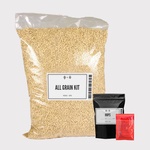 Our all grain kits are our own tried and tested recipes for classic and modern beer styles. Included in the kit are all the ingredients needed to make 20L using a standard BIAB (Brew in a Bag) setup such as our BIAB Starter kit, or your prefered equipment such as a Grainfather. You will also need a set of scales for measuring hops.

All our all-grain kits contains a milled grain bill, hops, yeast, and any other items required for the style (such as kettle finings, spices, brewing salts).

Anyone remember the West Coast styles and Breweries? Places like Russian River, Sierra Nevada, Alpine… Styles like American Pale Ale, West Coast IPA??? It is understandable that if you’re part of the haze mono culture that for the last 4 years has dominated both the home brew and commercial beer universe, you’ve most likely forgotten about the styles that in many ways created the new world of beer!

Strata is the new dank kid on the brewhouse. Strata is beaming with Mango, tamarillos, grapefruit smoothies and adventures in mystical pine forests. Yes you’re probably thinking after this that ‘I should brew a ‘Strata’ accentuated NEIPA’….. nah, why not do something different… That’s right… something other then a NEIPA. Calm down, it’s not the end of the world. Put the ego aside and brew this!

Call it what you want, this is homage to West coast style American Pale Ale, featuring Strata.