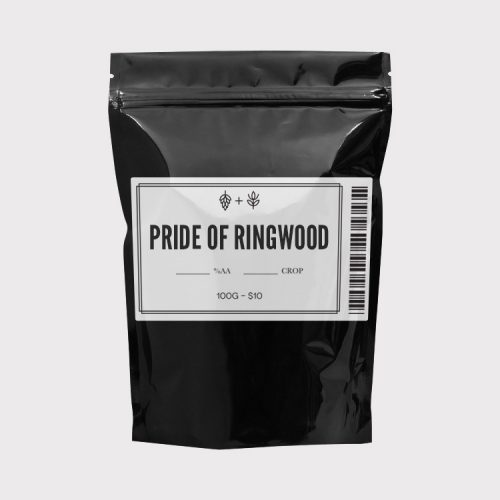 When Australian hop Pride of Ringwood was released in 1958 it had the distinction of being the hop with the highest alpha acid content in the world. Though that title has been long surpassed it is still an incredibly popular bittering hop. Best utilized fresh, Pride of Ringwood is primarily a bittering hop but also exhibits spicy, fruity aromas when used as a late addition.

The variety was developed by Bill Nash who then worked for the Carlton and United Brewery at the Ringwood Hop Research Station in Ringwood, Victoria. It was bred from English variety Pride of Kent through open pollination.

Pride of Ringwood once made up the vast majority of hops grown in Australia and at it??s peak reached 90% of total crop acreage. Elsewhere Pride of Ringwood is considered too late harvest for the US but was at one stage also grown in Kashmir, India. While the Australian Pride of Ringwood crop is largely disease free, when grown in other locations it can be susceptible to downy mildew.

Though it is primarily used in Australian lagers, there are plenty of examples of its use in the US. Buffalo Bill Brewery uses it in their Tasmanian Devil brew. Australian??s would be most familiar with its use in beers by Carlton and United Breweries, Fosters and Coopers.